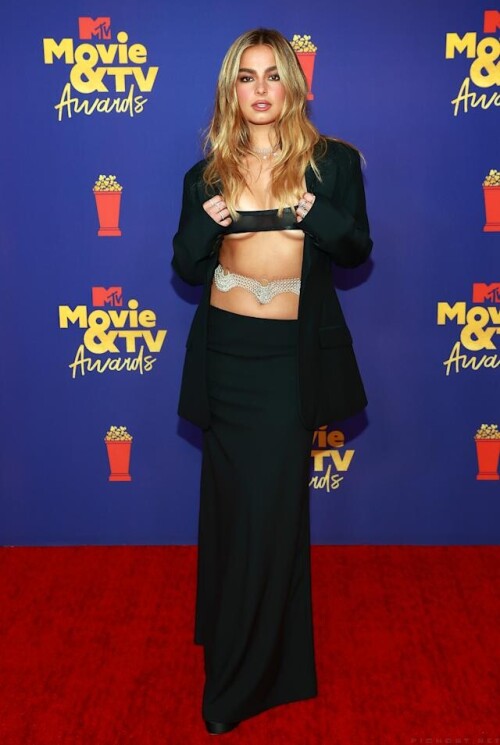 On Sunday, the 20-year-old showed up and showed out on the red carpet in a stunning, but arguably risqué Christopher Esber ensemble that featured a sheer black bandeau top and body jewellery. The look was styled by Hollywood's most in-demand stylist, Law Roach, who boasts stars like Zendaya and Anne Hathaway as famous clients.

Before arriving at the awards ceremony, Rae shared a few dolled-up snaps of her look to Instagram.

"MTV," she captioned her post, alongside a heart emoji.

"So hot I can’t handle it," one fan commented, while another added, "Yes! Slay queen!"
While many praised the TikTok star's daring, sultry look, others argued that the star did not dress conservatively enough considering all of the young, impressionable fans that look up to her. Many of Rae's followers were quick to call her out and dub her look, "barely a dress."

Addison, I really love you but this is kinda weird," someone else wrote.

"Girl, your target audience is 10-year-olds," another added.

'Chill, Your target audience is young," one person pointed out, adding, "and that belt looks like it hurts."
"When all the blue checks are hyping her up but all the real people are saying WTF is this," someone commented. "Because seriously, WTF is this? I guess it’s how a girl can stay relevant in Hollywood, you either show too much or no one talks about you."

Girl, don't post this. Young girls look up to you. This is really inappropriate," one follower said.

In an interview with Entertainment Tonight on the red carpet, Rae explained how excited she was to finally be at an in-person event, and flaunted her skirt for the camera, revealing that the belt is attached and not an accessory.

Rae is no stranger to backlash. In March, the social media star was in hot water with fans for performing dances made by Black creators on "The Tonight Show Starring Jimmy Fallon" without crediting them.

"I think they were all credited in the original YouTube posting, but it's kinda hard to credit during the show," she said," she told TMZ. "But they all know that I love them so much and I mean, I support all of them so much. And hopefully one day we can all meet up and dance together."