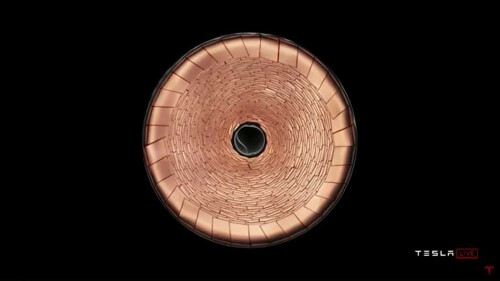 It appears charging times could be competitive with gas cars.
Tesla’s Battery Day presentation outlined big improvements in cost, energy, charging time, and pack size. We will show you our estimate of the new charging profile, an overlay of 2170 vs 4680 pack size, and an estimated cross-section of the new 4680 pack. We’ve also estimated the series-parallel cell configuration and a potential way Tesla will electrically connect the cells.

In a previous article (ref), we outlined the results of a preliminary thermal analysis that suggested that Tesla’s new 4680 pack would use a much simpler and easier to assemble flat plate cooling scheme and ditch the cooling snake in between the cells that they have been using since day one.

While Tesla didn’t specifically say it will go with flat plate cooling, it is strongly suggested for a number of reasons. The primary one being that you can’t effectively cool these larger diameter cells through the sides. The most effective way to cool the new tabless design is through the ends of the cells since the new tabless design provides a great thermal path between the cell cap and the inside of the cell.

The copper anode electrode plates themselves act as great cooling fins and provide nice uniform temperature distribution within the cell. The other reason we think flat plate cooling is likely is that Elon Musk said that the cells are glued to the bottom and top sheets of the pack. While his quote is in reference to added shear strength in the pack, we think the top and bottom sheets will also double as cooling plates. In the Model 3 pack, the cells are glued to the cooling snake.