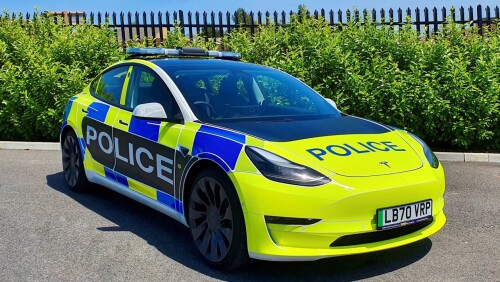 Tesla UK has revealed a police liveried Model 3 saloon fitted with blues-and-twos, which the company says will be available to emergency services across the UK for trial and assessment.

Police forces and other fast response services up and down the country are currently trialling more electric vehicles ahead of the UK Government’s targeted shift to all new car sales being fully electric by 2030.

Tesla has not revealed precise specifications for the Model 3 emergency service trial car, but the wheels would suggest it is a Performance variant of the brand’s best-selling model, meaning a range of up to 352 miles, 0-60mph in 3.1 seconds and a top speed of 152mph, alongside all-wheel-drive.

The move to trial the Model 3 as an emergency response vehicle in Britain mirrors that of deployments for the Model 3 with several police forces in the United States. Tesla has yet to confirm if any UK forces have come forward with an interest in the Model 3 so far.

Electric police cars in Britain are rare, but growing in popularity and are becoming an addition to the fleets of more and more constabularies. Gloucester Constabulary added 75 all-electric vehicles to its fleet in early 2020, though none of the cars - mainly Nissan Leafs - bought by the force have been deployed in an emergency response role.

Similarly, the Metropolitan Police has deployed a fleet of BMW i3s around the streets of the capital, and is also in ownership of 11 hydrogen fuel-cell Toyota Mirais.