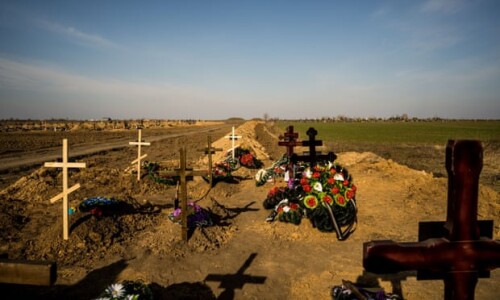 Russia-Ukraine war: what we know on day 32 of the invasion

Burial site of soldiers who died in Mykolaiv, Ukraine. US president Joe Biden on Saturday appeared to call for those around his Russian counterpart, Vladimir Putin, to oust him. Photograph: Vincenzo Circosta/ZUMA Press Wire/REX/Shutterstock
Helen Livingstone
Sun 27 Mar 2022 00.12 GMT

Joe Biden has condemned Vladimir Putin as a “butcher” who could no longer stay in power in a historic speech in Poland. The US president appeared to urge those around the Russian president to oust him from the Kremlin, although US officials later said he had been talking about the need for Putin to lose power over Ukrainian territory and in the wider region.
As Biden spoke, Russian missiles rained down on Ukraine’s most pro-western city, Lviv, 40 miles from the Polish border. The timing of the attacks, only the third on west Ukrainian targets since the war began, and the closest to Lviv’s city centre and its residential areas, was clearly designed to send a message to the White House.
The Kremlin has again raised the spectre of the use of nuclear weapons in the war with Ukraine. Dmitry Medvedev, the previous president of Russia and deputy chairman of its security council, said Moscow could use them to strike an enemy that only used conventional weapons.
The comments prompted Volodymyr Zelenskiy, appearing by video link at Qatar’s Doha Forum, to warn that Moscow was a direct threat to the world. “Russia is deliberating bragging they can destroy with nuclear weapons, not only a certain country but the entire planet,” said the Ukrainian president.
Ukrainian flag being hung at Kherson City Hall
Kherson diary: ‘We have more deaths from lack of medication than from bullets’
Read more
Ukrainian troops are reporting that Russian forces are using white phosphorus against them near the eastern city of Avdiivka. While these reports could not be confirmed, Volodymyr Zelenskiy has told Nato leaders that Russia had used phosphorus bombs that had killed adults and children.
Russian forces temporarily seized Slavutych, a northern town close to the Chernobyl nuclear site on Saturday, and took prisoner its mayor, Yuri Fomichev. After failing to disperse the numerous protesters in the main square – despite using stun grenades and firing in the air – the Russian troops released the mayor and agreed to leave.
The Institute of Mass Media in Ukraine has documented 148 crimes against journalists and the media since the start of the Russian invasion. It said five journalists had been killed, six captured or kidnapped and seven wounded.
The Ukrainian parliament has confirmed a fresh Russian attack on the nuclear research reactor in Kharkiv. In a tweet, it quoted the State Nuclear Regulatory Inspectorate as saying: “It is currently impossible to estimate the extent of damage due to hostilities that do not stop in the area of the nuclear installation.”
Tens of thousands of people have gathered in central London to express solidarity with the people of Ukraine. After a call by Volodymyr Zelenskiy for protests around the world against the Russian invasion, Trafalgar Square was transformed into a sea of yellow and blue.
Experts in the UK have warned that its Homes for Ukraine scheme risks operating as “Tinder for sex traffickers”. The warning comes as evidence emerges that UK-based criminals are targeting women and children fleeing the war.