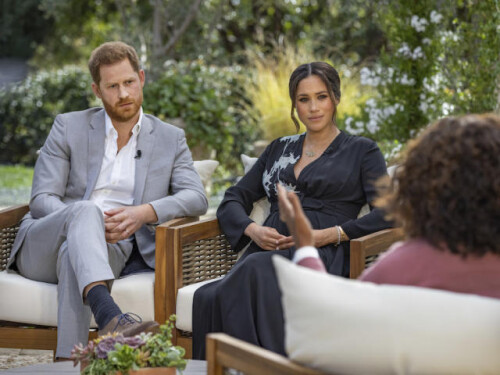 'Royal pain in the a**': Backlash intensifies after Prince Harry calls US First Amendment 'bonkers'

Prince Harry is facing a growing backlash in the US over his comments that the First Amendment is "bonkers".

Commentators in the US have called Harry a "pain in the a**" and asked the UK to "take him back" after he made the remark about the amendment which protects freedom of speech.

In a podcast with Dax Shepard Harry, 36, said: "I've got so much I want to say about the First Amendment as I sort of understand it, but it is bonkers.

"I don't want to start going down the First Amendment route because that's a huge subject and one which I don't understand because I've only been here a short time.

"But, you can find a loophole in anything.

"You can capitalise or exploit what's not said rather than uphold what is said."

The First Amendment, which opens the US's Bill of Rights, enshrines freedom of speech, religion, freedom of the press, and freedom of assembly.

Sean Hannity, who anchors the third biggest evening news show in the US, launched into a tirade at the end of his programme on Monday night after hearing Harry's comments, calling him a "right royal pain in the a**".

He said: "Harry, we really don't need you coming from England to give us lectures on the First Amendment.

"And if you can't understand the importance of free expression and the importance of constitutional principles that allow for a free exchange of ideas and opinions that make America the greatest country on Earth, then maybe it's time for you to move to a place more compatible with your restrictive ideas.

"This is what public figures in America go through."

He added: "Understand this is the same First Amendment that allowed you and your wife to trash your own family in the Oprah Winfrey interview. You and Meghan were allowed to accuse your family of racism.

"We don't really need lectures about customs or sacred freedoms, and by the way you're free to go home, make amends at the Palace with the people that you and your wife hurt deeply."

Hannity is a conservative political commentator who was reportedly close to Donald Trump during his presidency, speaking to him on the phone several times a week.

Amber Athey, Washington editor of The Spectator US, told Good Morning Britain: "The UK is one of the top 10 exporters to the US – as an American, in the words of former president Donald Trump, you all are not sending your best.

"I would beg you, please take Prince Harry back."

The View co-host Meghan McCain tweeted: "We fought a war in 1776 so we don’t have to care what you say or think. That being said, you have chosen to seek refuge from your homeland here and thrive because all of what our country has to offer and one of the biggest things is the 1st amendment - show some utter respect."

Texan senator Ted Cruz tweeted: "Nice that he can say that."

Harry's comment in the podcast was released last week but was initially overshadowed by his remarks about breaking the "cycle of suffering" in his family as he raises his son Archie, and awaits the arrival of his daughter, due in summer.

He also described LA as a "feeding frenzy" of paparazzi when he and his wife Meghan arrived there in March 2020, but later said the couple felt freer now they are settled in Santa Barbara.