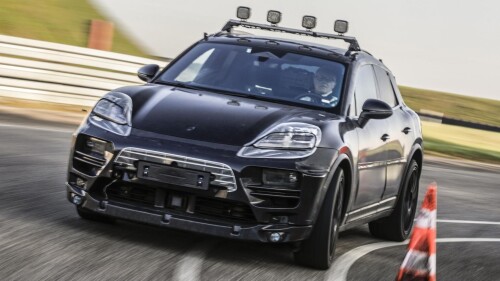 Official: Porsche is building a fully electric Macan, due in 2023

Official: Porsche is building a fully electric Macan, due in 2023. And it'll 'drive, look and feel like a Porsche'. Here's your first look!

Porsche will launch its all-new all-electric Macan in 2023. Prototypes have begun testing on public roads. Before launch they’ll do two million miles. Michael Steiner, Porsche’s engineering director, has been telling TopGear.com about the car.

Of the styling, he says: “It will look like a typical Porsche and fulfil your expectations of an electric vehicle. It is a typical Macan but much more modern and sporting.”

The deliberate-leak shots show a car with a wedgy bonnet line, sitting lower than the headlamps. It can pull that 911-alike trick because there’s no engine underneath. The lamps themselves are shallow, like the Taycan’s. Like that shovel nose, a tapered fastback is obviously going to be good for aero.

Ignore the false chrome window line at the back. That’s just disguise. So are the fat rear bumper and – durr – fake exhaust tips.

More specifically, he says: “It will have everything the current Macan has for performance technology and in addition high-end electric technology from the Taycan.” A helpful engineering drawing shows the four-wheel-drive and air springs. With low-mounted batteries, you’ve got to expect the E Macan is going to deliver in corners.

E Macan is the working name, Steiner says. They haven’t settled on the production badge. But it will be Macan-sized and not much more than Macan-priced.

It doesn’t use a combustion-car platform, nor the Taycan’s J1 platform or the VW Group’s MEB. It has a new electric platform called PPE that will be shared with the Audi A6 e-tron and others. He says Audi and Porsche both contributed their best attributes. “From our side that is the best genes for a sports car, and fast charging.”

Steiner confirms it will use 800V electrics, as with the Taycan. This allows ultra-fast charging – more than the Taycan’s 270kW. It also means high levels of regenerative braking for better efficiency when speeds rise and fall. In other words when you’re driving it like a Porsche, not steady-speed cruising the highways.

Audi has said the battery capacities of its PPE cars go up to 100kWh, and Steiner confirms Porsche shares that.

Of course there won’t be just one battery or power version. “We will have a typical Porsche spread of models, including a high-end super-performance variant [doubtless called Turbo]. Down the range, for efficiency, two-wheel-drive is worth a thought.”

So I ask how big the battery capacity and range might eventually get. Or will there be a sweet spot as chargers get closer together and more powerful? “It will be different for different car brands. At Porsche, weight plays a major role. It’s not the answer to add kilograms for range. Our main target is to reduce weight and charge times from our present 20 minutes. We are convinced that highway infrastructure should be improved. We plan to increase range slightly but we’re not aiming for the world championship.”

Big batteries also mean the car is carrying loads of lithium that its owner will seldom actually use. He says this takes more energy in mining, and makes the car less efficient, so the CO2 break-even point in its lifecycle, versus a petrol car, will be further away.

The original Macan remains Porsche’s biggest seller. It might not feel old, but it is – it has been around since 2013. So, says Steiner, “before the electric Macan in 2023 we will invest in updating the existing one”.

That facelift Macan will then sell side by side with the electric one. “So customers and regulators can choose. We do not know how fast the switchover will happen in different regions.”

There won’t be a PHEV version of the revised combustion Macan. That’s just for the Cayenne and Panamera, says Steiner. Across the Porsche range, half of Porsche’s sales will be EV or PHEV by 2025, he adds. Given the 911 and 718 have no mains cable, it means a very high proportion of the four-doors and SUVs will be PHEV (Panamera and Cayenne) or EV (Taycan and Macan).

This should add business, says Steiner. “More than half of Taycan customers are new to the brand. But some have a Porsche and have kept it. We are looking forward to the same with the E Macan.”