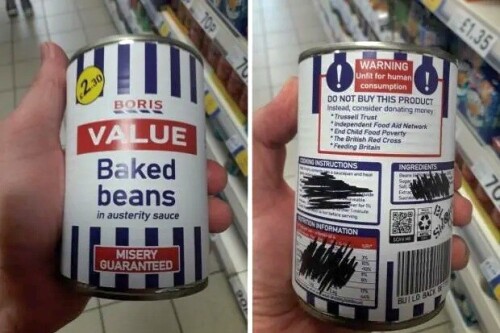 END_OF_DOCUMENT_TOKEN_TO_BE_REPLACED

Mystery as 'Boris Beans' with 'misery guaranteed' appear in Tesco ... 😆

Added to NewsRel — 1 month ago

Mystery as 'Boris Beans' with 'misery guaranteed' appear in Tesco ... 😆

A member of the public said the product, an apparent protest against the current cost-of-living crisis, was found in Tesco Express on Queens Road, Brighton.

The "Boris Beans" are said to come in a tasty “austerity sauce” with “misery guaranteed”.

It comes after a Tory minister said hard-up families should switch to supermarket value brands to survive.

Jess Tilley, who discovered the beans, said: “I had popped into Tesco Friday afternoon on my way home to grab a few items when I noticed the tin on the shelf.

“I had a closer look and was surprised to see that it was an artistic protest - no doubt over recent comments from the Conservative minister saying that those who cannot afford food should eat 'value range'."

The reverse of the can instructs potential buyers to ditch the product and suggests a donation to charity instead.

The cost-of-living crisis has seen many people across the UK choose between purchasing food or paying their bills, as energy prices suddenly increased.

Many believe Boris Johnson's government should be doing more to help those in need.

Do not buy this product, it said

Environment Secretary George Eustice was recently branded "out of touch" after he used an interview with Sky News to urge cash-strapped households to buy cheaper products.

He admitted soaring food and energy bills would “undoubtedly put a pressure on household budgets” but he maintained it could be managed by shopping more wisely.

He told Sky News: “Generally speaking, what people find is by going for some of the value brands rather than own-branded products – they can actually contain and manage their household budget.”