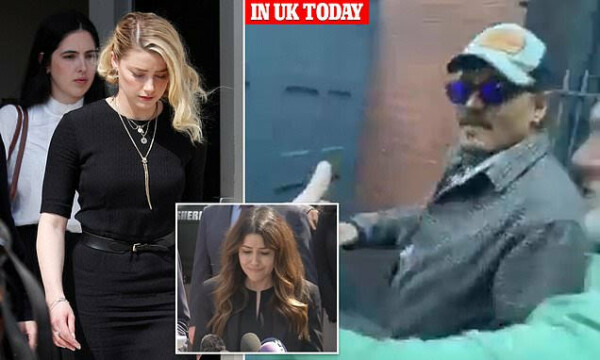 END_OF_DOCUMENT_TOKEN_TO_BE_REPLACED

Added to NewsRel and categorized in News 📰 — 8 months ago

---- The jury gave me my life back.' Johnny Depp celebrates in the UK as he wins defamation trial against 'heartbroken' ex-wife Amber Heard and walks away with $8.35M in damages

The jury ruled in Johnny Depp's favor today in his blockbuster defamation case against Amber Heard
Depp was awarded $15million in punitive and compensatory damages
The judge reduced the punitive damages to the Virginia maximum of $350,000 so Johnny will now only receive $8.35million in total after paying Heard $2million
Amber Heard was awarded $2million in compensatory damages and zero in punitive damages
Depp was not present as he was in the UK on tour with guitar legend Jeff Beck - a source claimed it was due to 'previously scheduled work commitments'
Meanwhile, Heard walked into court wearing a black dress and appeared anxious
In a dramatic courtroom moment, the jury returned with their verdict only to be told by the judge that they had not completed the paperwork properly
During the six-week trial in Fairfax, Virginia, Depp called 38 witnesses while Heard's team called 24
Both Depp and Heard gave evidence for four days each, including a cross examination from the opposition lawyers
The court heard audio recordings that Depp and Heard made during their arguments
The jury saw dozens of texts, photos, videos, medical records and even pages from the former couple's 'Love Journal' they hand wrote to each other
Johnny Depp has won his libel case against Amber Heard, saying he now has 'his life back' after the jury ruled he was defamed and awarded him $15million. ----

In a statement after Wednesday's verdict, Depp said, 'Six years ago, my life, the life of my children, the lives of those closest to me, and also, the lives of the people who for many, many years have supported and believed in me were forever changed.

'And six years later, the jury gave me my life back. I am truly humbled.'

After less than three days of deliberation, Heard was awarded $2million in compensatory damages out of the $100million she was seeking in her countersuit against her ex-husband. She was awarded zero dollars in punitive damages.

Despite the jury awarding Depp $15million, the judge reduced the $5million punitive damages award to the Virginia maximum of $350,000, reducing Depp’s total to $10,350,000 – minus the $2million he was ordered to pay Heard. In total Depp walks away with $8.35million in damages

Depp was not present as he was in the UK on tour with guitar legend Jeff Beck - a source claimed it was due to 'previously scheduled work commitments.' Meanwhile, Heard walked into court wearing a black dress and appeared anxious. After the verdict was read out Heard briefly hugged her lawyers then exited the courtroom.

Depp's legal team were all smiles and joined each other in a group hug of 10 people.

In a dramatic courtroom moment, the jury returned with their verdict only to be told by the judge that they hadn't completed the paperwork properly.

The judge was handed an envelope by an officer of the court and asked the lawyers to approach for a brief discussion. Left alone, Heard looked down at the floor, lost in thought before her lawyers came back to her.

Judge Azcarate addressed the jury and said: 'I need to give the forms back to you. When you find for a defamatory statement, one or more, you need to fill out the compensatory damages. It needs to be at least a dollar up to whatever the damages are. For punitive damages you can put a zero. I need those lines filled out. Retire back to the deliberation room and do that for me.'