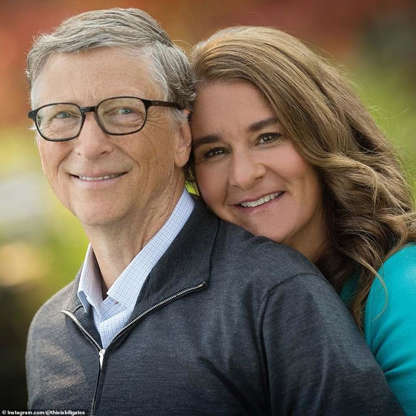 Melinda Gates, a philanthropist and campaigner for female empowerment, could be about to become the world’s second-richest woman, with a fortune estimated at $73bn.

In her divorce petition filed on Monday at King County superior court in Seattle, Washington, Melinda Gates stated that her marriage to multibillionaire Microsoft co-founder Bill Gates, one of the richest men on the planet, had “irretrievably broken” and called on the courts to divide up the couple’s combined $146bn (£105bn) fortune

The 50-50 split is likely because the divorce petition filing also reveals that the couple – who married in 1994 after first hitting it off playing Cluedo (she won) – did not sign a prenuptial agreement, and under Washington state law divorcing couples are expected to share their assets equally.

If that goes ahead, Melinda French Gates – who has recently introduced her maiden name French into her social media profiles – will rank behind only Françoise Bettencourt Meyers, the 67-year-old L’Oreal owner, whose inherited fortune is now worth about $83bn.

According to the Bloomberg billionaires index, Bill Gates is currently ranked as the world’s fourth-richest person, with wealth totalling about $146bn. However, he would be far richer – and perhaps still the world’s richest person – if he had not already given away at least $40bn to the couple’s charity, Bill and Melinda Gates Foundation.

The divorce also throws into question the future of the couples’ philanthropic efforts via the foundation, which also pulls in cash from other donors, ranging from fellow billionaire Warren Buffett to the UK government. While the couple have said they will remain co-chairs of the foundation some experts suggest the divorcing pair may have different and strongly held views about the future direction of the charity.

It is a vast foundation, employing 1,600 staff based in Seattle, which has given away $50bn to projects across 135 countries since it was founded in 2000 and still has $43bn worth of assets.

It focuses on projects to improve global healthcare, education and gender equality with big ambitions – bidding to eradicate some diseases, such as polio, completely. It also provides support in the event of natural disasters. Last year, the foundation provided $1.8bn for emergency coronavirus medical supplies, PPE and vaccines. A further $2bn has been earmarked to try and wipe out malaria within a generation and $1.6bn to help students of colour in the US. The Guardian’s Global Development website is supported by the foundation.

Rob Reich, a professor of political science at Stanford University, said: “Since the Gates foundation is a family foundation and the Gateses are breaking apart their family, the divorce may have huge repercussions for the foundation and for its work across the globe.”

The couple’s staggering personal wealth includes their 66,000 sq ft main home overlooking Lake Washington which is valued at $130m, and a string of holiday homes such as a $43m oceanfront beach house near San Diego, a $59m ranch in Florida, and a 492-acre ranch in Wyoming.

As well as the property portfolio, the couple own several private jets and a fleet of cars, including a rare $2m Porsche 959 and an electric Porsche Taycan. Their main home in Medina, across Lake Washington from Seattle, features garages that can accommodate up to 23 cars.

Their main home, known as Xanadu 2.0 after the vast fictional estate of Charles Foster Kane in the 1941 film Citizen Kane, was constructed from 500 Douglas fir trees and features no fewer than six kitchens.

There is also a pool house with a 60ft swimming pool with an underwater sound system, while for those who wish to exercise without getting wet there’s a trampoline room.

In the main house is a 2,100 sq ft library with a domed roof. On the ceiling is an engraved quote from The Great Gatsby. The library is home to the Codex Leicester, a 16th-century Leonardo da Vinci manuscript that Gates bought at auction for $31m in 1994.

Advertisement
‘Your mouth becomes a minefield’: the Americans who can’t afford the dentist
The Gates are also among the biggest private owners of farmland in the US, with about 242,000 acres across 18 different states which is worth about $700m. To put that into perspective, the land holdings are almost the size of Hong Kong.

Washington state is one of the few US states with so-called “community property” laws, which presumes that most property acquired over the course of a marriage belongs jointly to the spouses and should be divided equally. The pair are scheduled to appear in court in April 2022.

The Gates’ split comes soon after Jeff Bezos, the Amazon boss and the world’s richest person, separated from his wife of 25 years MacKenzie Scott. Their 2019 divorce – also in Washington state – turned Scott into the world’s fourth-richest woman, with a $38bn fortune. Her wealth, mostly held in Amazon shares, has since soared to $60bn as the Amazon share price has risen and she is giving away billions in philanthropic gifts – $6bn in 2020 alone.

French Gates and Scott collaborated last year to launch a $30m project called the Equality Can’t Wait Challenge, to expand women’s influence in the US.

Melinda, who has been described by Forbes magazine as the “most powerful woman” in philanthropy, has also founded Pivotal Ventures, an investment and incubation firm focused on women, family and social progress.

In an interview to promote the book, she said: “Bill and I are equal partners. Men and women should be equal at work.”

The couple have three children: Jennifer, 25; Rory, 21; and Phoebe, 18. Jennifer Gates, writing on Instagram, said it had “been a challenging stretch of time for our whole family”.