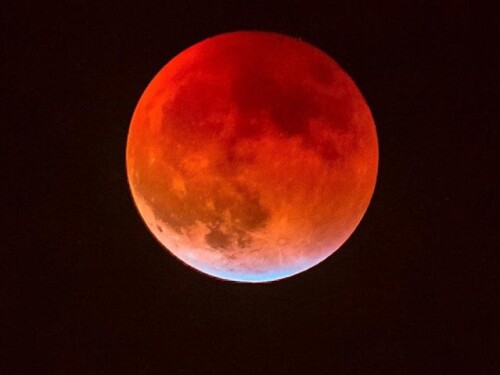 Full moon May 2021: ‘Blood’ supermoon will be most spectacular in years

This month’s full moon will appear bigger, brighter and redder than usual, as the rare simultaneous occurrence of a supermoon and a lunar eclipse takes place in some parts of the world on 26 May.

May’s full moon is the second of two supermoons in 2021, with the previous one taking place in April over largely cloudy skies in the UK.
The term supermoon refers to the moon’s proximity to Earth, having first been coined in 1979 by the astrologer Richard Nolle. Any full or new moon that is within 90 per cent of perigee – its closest approach to Earth – is considered a supermoon.

According to Nasa, the full moon on 26 May will be just 157 kilometres (98 miles) closer to Earth than April’s supermoon.

Making the spectacle even more unusual is that it coincides with a total lunar eclipse for the first time in nearly two and a half years.

But while the supermoon will take place throughout the world, the total lunar eclipse on the same date will only be visible across parts of the western Americas.

A partial lunar eclipse will occur in large parts of the US and eastern Americas, as well as regions of east Asia.

A lunar eclipse occurs when the orbit of the moon takes it into Earth’s shadow, blocking the sun’s light from reaching it. Instead, the light from the sunrises and sunsets on Earth are reflected onto the moon, making it appear reddish in appearance – earning it the ‘Blood’ moniker.

“The total lunar eclipse of 26 May, 2021, is the first in nearly two and a half years,” Nasa’s website states.

“It occurs within hours of the closest perigee of the year, making the moon appear about 7 per cent larger than average.”

Despite not getting a chance to see the lunar eclipse, skygazers in the UK should at least be treated to a good view of the biggest and brightest supermoon of the year.

According to the long-range forecast from the Met Office, poor weather conditions over the weekend will be replaced by far more favourable skies on and around 26 May.

“There is a chance of more settled conditions to gradually become established,” it states. “Rain and showers are likely to clear away to the east, leaving drier and less windy conditions behind.”