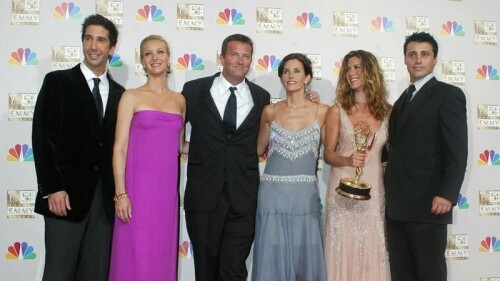 Uploaded to General 👤 — 1 year ago

The much-anticipated reunion special of Friends has finally got a US release date and trailer after a lengthy delay caused by the coronavirus pandemic.

Friends: The Reunion will be available on the HBO Max streaming service from 27 May after the sitcom's original cast were able to film together last month.

Friends was one of the biggest sitcoms of the 90s and ended in 2004.

The 10-series show has found a new generation of fans thanks to re-runs and streaming services like Netflix.

All six members of the original cast - Matthew Perry (Chandler), Jennifer Aniston (Rachel), Courteney Cox (Monica), Lisa Kudrow (Phoebe), Matt LeBlanc (Joey) and David Schwimmer (Ross) - are set to take part, though it's not yet been announced how it can be viewed in the UK.

They will feature alongside other supporting stars including Maggie Wheeler (Janice), James Michael Tyler (Gunther), Reese Witherspoon (Jill) and Tom Selleck (Richard), as well as Elliott Gould and Christina Pickles, who played Ross and Monica's parents, Jack and Judy.

A trailer for the reunion, released on Thursday, shows the six actors walking together to a melodic version of the show's iconic theme-tune of I'll Be There For You by The Rembrandts.

A caption then teases the special as: "The One Where They Get Back Together".
Rumours of a reunion originally swirled back in November 2019. It was originally due to air in May 2020 but the Covid-19 pandemic delayed production throughout the year.

Filming for the special eventually took take place last month on the show's original soundstage on the Warner Bros lot in Burbank, California, in front of a live audience.

Jennifer Aniston shared the trailer on Instagram on Thursday, adding: "It's official! The #FriendsReunion premieres May 27th on @HBOMax - could we BE any more excited?!"