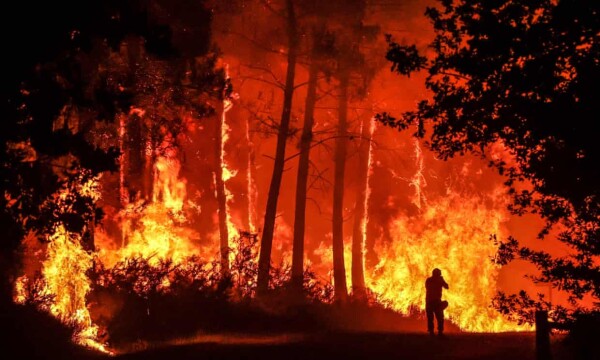 END_OF_DOCUMENT_TOKEN_TO_BE_REPLACED


Hundreds of firefighters from across the EU have been rushed to France to help battle wildfires in an unprecedented show of international solidarity.

Most are stationed along a 26 mile (40km) active fire-front in the south-west, where a blaze described as “monstrous” continued to devastate pine forests.

German firefighters and their vehicles arrived in the early hours of Friday morning to help tackle the massive Landiras fire in the Gironde and the Landes, south of Bordeaux, which had sparked up again this week after destroying swathes of forest in July.

The ruins of a house destroyed by a fire that erupted in Belin-Beliet, south-west France.
The ruins of a house destroyed by fire in Belin-Beliet, south-west France. Photograph: Guillaume Souvant/AFP/Getty Images
Romanian firefighters and teams from Poland, Austria, Greece and Italy were also deployed to help more than 1,100 French firefighters try to contain the blaze. President Emmanuel Macron tweeted of the more than 360 firefighters arriving with vehicles and planes: “Our partners are coming to France’s aid against the fires. Thank you to them. European solidarity is at work!”