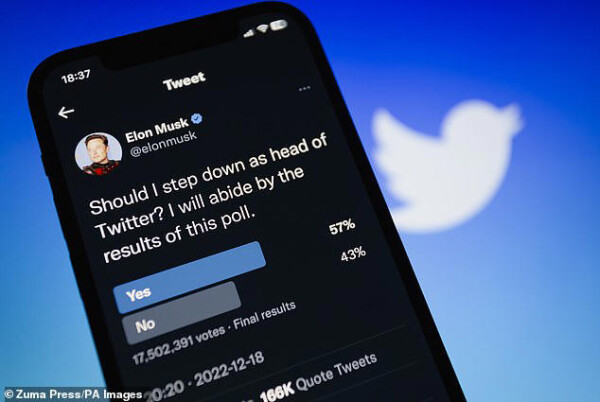 END_OF_DOCUMENT_TOKEN_TO_BE_REPLACED

Added to NewsRel and categorized in Tech News 💻 — 1 month ago

Elon Musk breaks his silence on disastrous Twitter poll calling for his resignation.

Elon Musk has finally broken his silence after a Twitter poll recommended he stand down from the social media platform.

Musk said that only Twitter Blue subscribers will be able to vote in future policy-related polls on the platform, in his first comments since millions of users voted for him to resign as chief executive of the site.

On Sunday, the Tesla boss said he would 'abide by' the result of a highly unscientific poll he organized and promised to honor, asking Twitter users whether he should step down.

The result was confirmed on Monday morning, with a total of 57.5 percent of more than 17 million accounts voting for him to step down from his role.

Normally a prolific user of the platform, Musk, who also runs car maker Tesla and rocket firm SpaceX, did not tweet in the immediate hours following the poll.

His silence was finally broken just before 11.30pm Monday, when he responded: 'Interesting' to a suggestion from convicted fraudster Kim Dotcom, founder of the once wildly popular file-sharing website Megaupload, that the results of the poll were skewed by fake accounts.

Replying to another user's suggestion that 'Blue subscribers should be the only ones that can vote in policy-related polls,' Musk said: 'Good point. Twitter will make that change.'

His Twitter stream continued into the early hours of Tuesday morning, linking to the site's World Cup statistics and laughing at a satirical take on Bruce Wayne running a poll about stepping down as Batman.