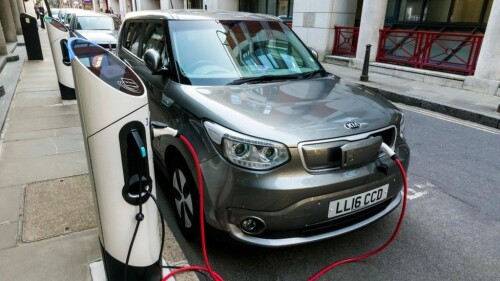 The number of electric vehicle charging points will reach 300,000 by 2030 under government plans but motoring groups say the roll out is not fast enough.

Under the plans, operators will have to ensure drivers can compare prices and pay by contactless card.

But the RAC said the chargepoint target "might sound impressive", but it is concerned the number is "not going to be sufficient" for growing demand.

The Department for Transport (DfT) said the number of chargepoints by the end of the decade would be the equivalent to almost five times the number of fuel pumps on UK roads today.

It said the £500m scheme would include £450m to boost public charging stations and on-street charging for people without driveways.

According to Melanie Shufflebotham, chief operations officer of Zap-Map, an EV charging app, 80% of electric vehicle owners have off-street parking.

She went on to say that currently London is the area most "well-served" with on-street overnight charging, due to how built up it is, but that other areas of the country have better access to rapid or ultra-rapid charging.

About a third of all chargers are currently in London.

The funds were previously announced as part of the government's £1.6bn Electric Vehicle Infrastructure Strategy, but the government has now given details about how the money will be spent.

New standards and legislation will mean operators will have to provide real-time data for customers to check the status of chargepoints and apps for customers to find the nearest available one.

They will also be required to have a 99% reliability rate at rapid chargepoints.

What does net zero mean?
Are we ready for EVs?
Simple guide to climate change
Car industry calls for electric charge watchdog
However, Sir John Armitt, chairman of the National Infrastructure Commission, which advises the government on major infrastructure, said in a report there was a gap emerging between the government's aspirations on net zero policy and actions taken to reach it.

"We need to turbo-charge the roll out of electric vehicle charging points, accelerating the installation of both rapid and on-street charging facilities so that the 2030 date for the end of the sale of new petrol and diesel cars remains viable, he said.

RAC head of policy Nicholas Lyes said it was "pleasing" to see the government set "ambitious reliability targets on the chargepoints themselves" as many current and would-be electric car drivers "worry that charging units will be out of order when they arrive".

He also warned that the installation timescale of 300,000 chargepoints needed be quicker with drivers looking to switch to electric "en masse" ahead of the 2030 ban on the sale of new petrol and diesel cars.