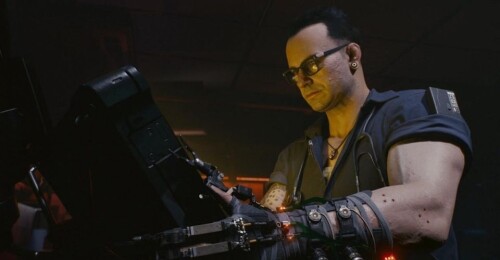 CD Projekt Red has revealed that Viktor Vektor, a quest-giving character in Cyberpunk 2077, has made over $147 billion dollars since the game's launch. The highly-anticipated sci-fi role-playing game, from the creators of the Witcher game series, experienced a disastrous launch in December 2020. The game was criticized for its myriad of technical issues and general lack of polish, though CD Projekt Red has released a number of patches in order to increase the game's quality.

Cyberpunk 2077's release is considered to be one of the most infamous video game launches of all time. The game was released in an undeniably broken state, with physical copies being recalled and the PlayStation Store removing the game almost immediately. Pre-release footage of the game was found to be grossly inaccurate, leading to claims of false advertising. Cyberpunk 2077's launch led to a number of lawsuits, which have recently been combined into a single class-action lawsuit against CD Projekt Red. These various lawsuits come from both shareholders and gamers who claim that the game's release was damaging and misleading.

CD Projekt Red has revealed, via a Twitter post, that Viktor Vektor has made a combined $147 billion thanks to Cyberpunk 2077 players. The quest-giver, a ripperdoc who installs cybernetic upgrades for the player, is involved early in the game's storyline. One particular quest, Paid in Full, involves the player paying Viktor $21,000 to repay him for a cyberware installation. Various other quests, such as Heroes and Beat on the Brat, are also completed through Viktor.

While CD Projekt Red continues to patch Cyberpunk 2077, a modding community also works to improve the sci-fi title. A recently-released mod, Purchasable Optical Camo Cyberware Overhaul, restores an invisibility upgrade that was cut from the game's final release. The cyberware upgrade, Optimal Camo, grants players limited invisibility in order to sneak up on their foes. Another Cyberpunk 2077 mod, titled True Next-Gen Shadows, increases the game's shadow range and decreases illumination in the environment. While the change is subtle, the mod does make the game's graphics more realistic and immersive.

Despite Cyberpunk 2077's less-than-optimal launch, CD Projekt Red continues to engage with the community and is working to fix the game over time. Viktor Vektor's $147 billion profit demonstrates just how many players have played the game at this point, indicating an improvement of quality. The game is still a work in progress, but Cyberpunk 2077 may have a future just as successful as Viktor's.