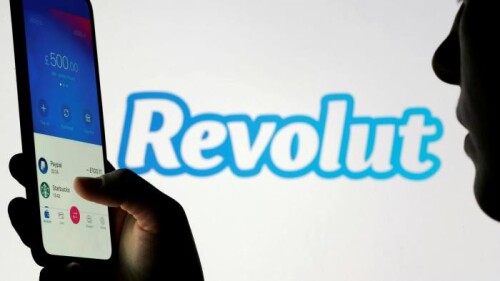 Please use the sharing tools found via the share button at the top or side of articles. Copying articles to share with others is a breach of FT.com T&Cs and Copyright Policy. Email [email protected] to buy additional rights. Subscribers may share up to 10 or 20 articles per month using the gift article service. More information can be found at https://www.ft.com/tour.
https://www.ft.com/content/fce3785d-ad70-436f-b42e-c478f98941eb

As we all know, Revolut has set out to become one of the Big Boys of Banking.

Earlier this year the London-based fintech, which is gearing up for a fundraising that will reportedly value it at between $10bn and $15bn, applied for a full UK banking licence. It has also hired grandees from the world of banking and traditional finance such as the founder of the firm now known as Abrdn, Martin Gilbert, and former Goldman Sachs vice-chair Michael Sherwood.

But somewhat paradoxically, Revolut is also setting out to become one of the Big Boys of Bitcoin.


Please use the sharing tools found via the share button at the top or side of articles. Copying articles to share with others is a breach of FT.com T&Cs and Copyright Policy. Email [email protected] to buy additional rights. Subscribers may share up to 10 or 20 articles per month using the gift article service. More information can be found at https://www.ft.com/tour.
https://www.ft.com/content/fce3785d-ad70-436f-b42e-c478f98941eb

It is not hard to see why — the company has never been profitable on an annual basis, even if it has occasionally on a month-to-month basis. And the only months that this has ever been the case have tended to be moments of crypto mania. It was briefly profitable during the bitcoin boom of late-2017, and Revolut said recently that it had been profitable every month since November, during which time bitcoin increased in value by more than 300 per cent. With the company charging 1.5 per cent per transaction and opening 300,000 new crypto wallets per month in December and January — well, you do the math, as they say.

But Revolut is planning to change up its bitcoin strategy. Until now there has been what the fintech called a “walled garden” system, whereby you didn’t actually have control of your own bitcoin; rather you had a claim on a certain amount of it and could only withdraw it by switching it back into fiat currency. As of next Thursday, however, customers using their “Revolut Metal” premium account will be allowed to withdraw bitcoin to another bitcoin wallet. This means it will be a real bitcoin transaction, recorded on the real bitcoin blockchain, which has not been the case until now. It will start small-scale, in “beta mode”, with withdrawals restricted to £500 a day or £1,000 a month.

Revolut wasn’t actually meant to announce this till next Thursday, but it accidentally did so via a now-deleted blog post on Thursday morning, reported on by AltFi, which the company told us was “due to a scheduling error”. But Revolut did announce it to employees on Wednesday evening, in a company-wide communication. And we get the impression Revolut is quite excited about it all.

Employees were told (emojis Revolut’s but emphasis ours):

And . . . our first user who is not a Rev employee has now successfully withdrawn Bitcoin to their own wallet and this transaction is recorded on the blockchain (wen NFT? 💰)

There’s a fun bit at the end after various teams have been thanked:

And also . . . thank to you Bitcoin, for making all our dreams come true — only up 📈

*not investment advice — Bitcoin is a high risk asset not covered by FCSC protection and extremely volatile. Investments may go down as well as up.

Thank goodness they added that disclaimer at the end, eh? We were beginning to think they might be some kind of irresponsible crypto bro types, who only seemed interested in making a load of easy money from the huge fees they charge retail investors, and didn’t really seem like the type of people who you’d want to look after your actual hard-earned cash. A shame, though, that they got the name of the Financial Services Compensation Scheme (FSCS) wrong.

But it’s an interesting development. Revolut is regulated by the FCA as an e-money institution, but does not have any kind of crypto licence because . . . no such thing exists in this country. The walled garden system meant that, in theory, Revolut wouldn’t lose track of where the money was going — you couldn’t just send your money to a bitcoin wallet in Iran or North Korea, for instance.

We asked Revolut how they would prevent crypto withdrawals becoming an avenue for money launderers and they said that “all external crypto addresses that a user adds to their account and all user withdrawals will be screened by Revolut’s blockchain analytics partner”, and that “Revolut’s blockchain analytics tool analyses each address and provides a risk score based on the address’s connection with illicit activity (previous hacks, dark market activity, etc) as well as connections to sanctions list and terrorist financing sources.”

All very well, but what about if this is a new address that hasn’t been connected with such activity?

In addition to blockchain analytics, Revolut has adapted its own anti-money laundering rules to apply to its cryptocurrency product, which are triggered when a users’ behaviour on the Revolut App suggests an increased risk of money laundering. If these addresses or withdrawals breach any of Revolut’s anti-money laundering rules Revolut will follow its financial crime procedures, depending on the severity of the breach. (As in other fincrime cases we don’t disclose the nature of the procedures for obvious reasons.) Unlike many other crypto companies, Revolut has the advantage of applying financial crime controls to a regulated business and has leveraged this experience in designing the systems and controls surrounding the cryptocurrency withdrawals product.

All we’d say is thankfully Revolut hasn’t had too many issues with its anti-money laundering procedures in the world of real money.

“2021 is the year of the crypto at Revolut!”
Revolut is going hard on crypto more generally it seems — it sent out an email to customers earlier this month in which it announced 11 new crypto tokens were now tradable:

(We keep telling you, the thing that gives value to all these crypto coins — last count 9,486 of them — is scarcity.)

2021 is the year of crypto at Revolut! A whole year to bring you new features, new tokens, and more surprises along the way.

If you haven’t explored crypto in the app yet, this is a great opportunity to discover something new.

With “hot coins” like “The Graph” now available, the opportunity really is all ours. Thank *you*, Revolut, for making all our dreams come true. We know you’re not a bank in the UK yet, but we feel like maybe our money is actually protected by your FCSC (For Crypto Spawns Crypto!) scheme after all. We trust that with you, our money really is only going up 📈 .