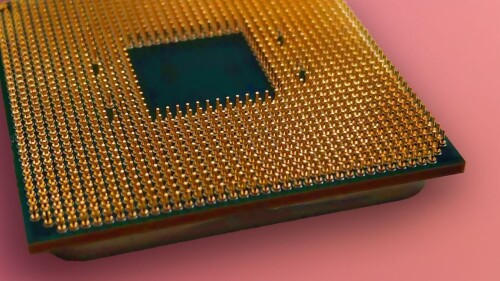 AMD: Bent CPU pins may become a thing of the past as AMD eyes major socket change

-- Now you'll have to watch out for bending motherboard pins instead. --

If you've been around AMD chips for a while then you've probably had to bend a pin back into place once or twice. Or at least the clumsy among us have (myself included). It's just all too easy with a pin grid array (PGA) design. That could all be changing with the next shift in socket for team red, however, as the latest leaks suggest a land grid array (LGA) design on the way with AM5.

According to a tweet from Executable Fix, a well-known leaker, AMD will finally move away from PGA to LGA with the shift to AM5, the new socket set to replace AM4. They say the new socket design will be LGA-1718—the number representing the number of pins required for the package.

They also note that a coming generation of AMD chip will support DDR5 and PCIe 4.0 with a 600-series chipset.

For now, let's focus on the socket. When we talk about PGA, we're most often discussing processors with pins sticking out the underside of a chip that slot into a motherboard with a compatible socket. An LGA design will instead see a flat array of connection points on the processor, which will align with pins within the motherboard's socket.

Either way you look at it, you're getting some very bendable, if not breakable, pins. But in my opinion it's much easier to bend those pins on the CPU.

While a shift to LGA may seem somewhat trivial, the change will mark a major shakeup in AMD's desktop lineup. AMD has long stuck with a pin grid array (PGA) for its CPU packaging. You could go all the way back to the original Athlon processors and find a chip package not all that different from today's 16-core Ryzen 9 5950X.

AMD isn't a stranger to LGA, though, as Epyc's SP3 socket and Threadripper's TR4 and sTRX4 sockets are all LGA 4094 designs. Intel, too, uses LGA for the majority of its desktop and server chips.

The other popular alternative is a ball grid array (BGA), which is widely used today, primarily in mobile devices. The reason we've not seen it much on desktop is because BGA designs actually see the chip soldered permanently to the socket.

AMD had previously promised to continue support for the AM4 socket until 2020, and has since stuck to it for its Zen 3-powered Ryzen chips on desktop. While the future of AMD's Ryzen releases remains a little hazy, it's likely that the next major architectural release from the company, likely Zen 4, will arrive with the new AM5 socket.

Backwards compatibility between even AM4-compatible chips is anything but a sure thing, but the shift to AM5 will certainly rule out any future upgrades to Zen 4 for gamers with 500-series motherboards.

With AMD's track record, though, AM5 will likely be around for a good while before it's replaced by something even shinier. AM4 has been around since 2016.