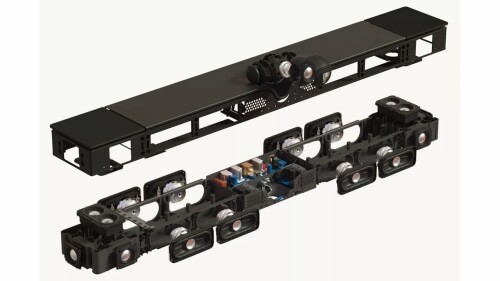 END_OF_DOCUMENT_TOKEN_TO_BE_REPLACED

A new Dolby Atmos soundbar that puts the Sonos Arc to shame! The Devialet Dione 👌

Added to NewsRel and categorized in Technology📱💡 — 1 month ago

A new Dolby Atmos soundbar that puts the Sonos Arc to shame!

French speaker specialist Devialet has just unveiled the Dione, a Dolby Atmos soundbar that’s designed to give you the impact of a soundbar and subwoofer combo, but in a single unit. I had the chance to try it out, and I can tell you one thing up front: it delivers.

The Dione is far from the first of its kind: plenty of the best soundbars aim to bring serious sound fidelity from a single box, because there are plenty of people who prefer not to have to house a chunky subwoofer somewhere in their living room. The Sonos Arc is probably the most famous single example – but even then, Sonos will happily also sell you a subwoofer, partly because there’s simply no competition between the bass the Arc is capable of producing and what even a cheaper subwoofer can.

But the Devialet Dione doesn’t want you to have to deal with a subwoofer at all. And so it’s a big beast, designed with eight force-cancelling subwoofer drivers built-in, which take up a huge portion of its frame, with an array of full-range drivers at each end that create width and height, and a sphere in the centre that delivers the centre channel.
The eight subwoofers have a huge and clear impact immediately, and it’s what really sets the Devialet apart from the competition. A car engine in a soundtrack rumbles towards your diaphragm as well as your ears; an explosion really sounds like it’s tearing a building apart; and even music gets that full-bodied bassy resonance it needs to sound truly realistic. I use the Sonos Arc without a subwoofer as my main sound system at home, and the Dione adds a whole new dimension compared to it… and not a subtle one. It's immediate, and it underpins everything, like how a layer of paint looks more full and vibrant with the right undercoat.

Using eight woofers is vital here not so much for the total power output (though it doesn’t hurt), but more for the force-cancelling configuration (or push-push setup, as its often known in hi-fi). What this means is that you have four drivers facing forward and four facing backwards in perfect opposition to each other, and they’re matched so that exactly the same audio comes out of both

The point is to reduce the physical vibration that people associate with subwoofers – they’re not really supposed to shake your shelves. If the fittings are shaking, it means energy is getting wasted, and the vibrations of the body will be interfering with the vibrations that make the sound. In a force-cancelling system, the sound is played in both directions at once so that any reaction to their force that would cause shaking in the body is balanced out by having the exact same force going in the opposite direction. Unstoppable force meets… other unstoppable force. So it means that the Dione won’t vibrate your OLED TV right off your wall, or cause your TV stand's screws to rattle. And it’s less likely to transfer through the floor and annoy the neighbours.

Having great bass also helps you to appreciate how well other effects stand out, since you get to experience a bigger dynamic range. The Dione impressed me with its handling of detail as well, and is particularly good for positional audio to the left and right. With a Dolby Atmos movie, you can really feel the noise of something rocketing across the screen, and it can get pretty close to sounding like it’s made it all the way to your direct left or right.

There are 17 speakers in total, configured for 5.1.2 channels of Dolby Atmos sound. Obviously, eight are the subwoofers, but that still leaves nine speakers just for the other channels.

The only thing I wasn’t immediately impressed by in my listen was the height, which certainly sounded tall, but never really felt overhead in the same way that the left and right sounded like they were actually to my sides at moments. But I had limited testing time, so we’ll have to wait until our full review for more of a verdict.

As I mentioned above, all of this tech means that the Dione is deep physically as well as aurally. It’s about the same height and width as the Sonos Arc, but is 50% deeper, which is going to push some people’s space to its limit, depending on how big your TV’s stand is.